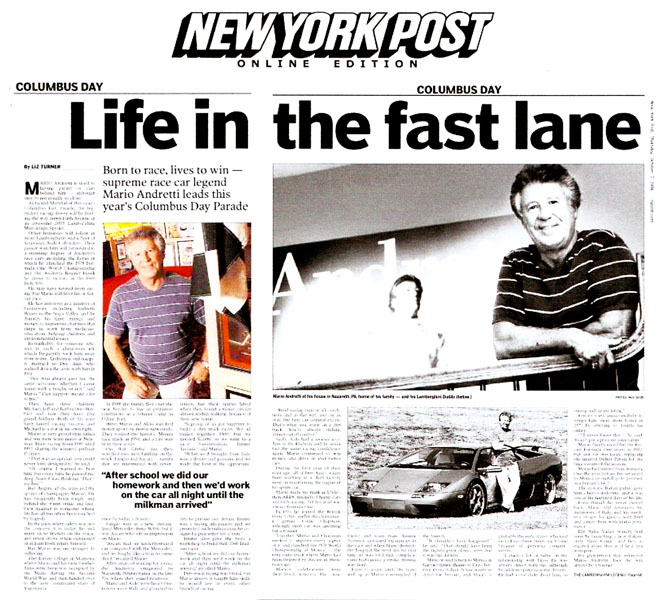 New York Post Columbus Day special section 2004
The news that F1 superstar Fernando Alonso was going to race in the Indianapolis 500 brought to mind one of the commissions I'm most proud of - interviewing the legend Mario Andretti, a Formula One champion who won the Indy 500 in 1969. (Full text below.)

I feel terrible because I was an hour late, and I made him cry. But he was such a gent.

I'd been invited to his home in Pennsylvania, a great honour, but as I lived in Michigan, I flew to New York and stayed over night with a friend. She then kindly loaned me her VW Beetle. There was no sat nav, and I missed the turn-off on the freeway. Fear crept down my spine as I started seeing signs to Chesapeake Bay.

I called Mario's assistant, and drove las if I was racing Fangio at Monza. Apologies Beetle, and its kind owner. I arrived just as Mario was leaving for his next meeting. The photographer had, at least, arrived on time and got the shoot done. Mario said he could spare 10 minutes.

To show I was a real enthusiast, I hit him with the question about turning down Enzo three times and his face warmed with a lovely grin. Then I mentioned that I'd interviewed Hazel Chapman about the beginnings of Lotus for Classic & Sports Car. I told him I'd seen the photo on her wall of Colin and Mario, and she'd said how fond they both were of him. He called his assistant over and asked her to cancel his next meeting.

I don't know how long I stayed. I could have stayed all day, but I was aware how busy he was and how generous he was being with his time. He showed the snapper and I around his trophy room, an incredible Aladdin's cave of gold and glory. The 1978 Formula One trophy was really quite small and modest in comparison with most of them. It was as he showed it to me, that I said how sorry I was about the loss of his friend, Ronnie Petersen. I felt awful as I saw how raw that wound still was, and the tears welled up in his eyes as he talked about it.

We talked about many more happy times. My impression of him was that he was a grounded, generous nice guy - which seems strange in a world of cut and thrust and winner takes all, but it's good to know that's possible.

Life in the Fast Lane

Mario Andretti is used to having plenty of cars behind him – although they’re not usually so close.

As Grand Marshall of this year’s Columbus Day Parade, the legendary racing driver will be leading the way down Fifth Avenue in an awesome 2005 Lamborghini Murciélago Spyder.

Other honorees will follow in more Lamborghinis and a fleet of luxurious Audi Cabriolets. Then parade watchers will be treated to a stunning display of Andretti’s race cars, including the Lotus in which he clinched the 1978 Formula One World Championship and the Andretti Bawner-Hawk he drive to victory in the 1969 Indy 500.

He may have retired, but he lives at a flat-out pace. He has interests in a number of businesses, including Andretti Wines in the Napa Valley, and he donates his time, energy and money to numerous charities that range in work from medicine, education, helping children and environmental issues.

Remarkably, for someone who was in such a glamorous job, which frequently took him away from home, Andretti is still married to Dee Ann, who walked down the aisle with him in 1961. “Dee Ann always gave me the same welcome, whether I came home with a trophy or not,” Mario told me. “That support meant a lot to me.”

They have three children, Michael, Jeff and Barbra Dee (Barbie) and now they have five grandchildren. Both of his sons have tasted racing success, and Michael is a star in his own right.

Mario is very proud that father and son were team mates at Newman Haas racing from 1989 until 1992, sharing the winners’ podium 15 times.
“That was so special, you could never have designed it,” he said. "Of course I wanted to beat him, but every time he passed me, deep down I was thinking, “That’s my boy!”

But despite all the wins and the sprays of champagne, Mario’s life has frequently been tough, and behind the warm smile and laid-back manner is someone whose life has all too often been touched by tragedy. In the past, when safety was not the concern it is today, he lost many close friends on the track, and often drove when exhausted or in pain himself.

But Mario was no stranger to suffering. The Italian village of Montona where Mario and his twin brother Aldo were born was occupied by the Nazis during the Second World War, and then handed over to the new communist state of Yugoslavia.

In 1948, the family flew over the border to live in primitive conditions in a refugee camp in Udine, Italy. Here, Mario and Aldo watched motor sport on movie newsreels. They visited the historic Monza race track in 1954, and a fire was lit in their souls.

On that momentous day, they watched two men battling on the track: Fangio and Ascari – names that are murmured with reverence by today’s drivers.
Fangio won in a new, streamlined Mercedes-Benz W196, but it was Ascari who left an impression on Mario.“Ascari had an underpowered car compared with the Mercedes, and he fought like a lion to come third,” recalled Mario.

After years of waiting for a visa, the Andrettis emigrated to Nazareth, Pennsylvania in the late 50s, where they joined relatives. Mario and Aldo were heartbroken to leave Italy and planned to return, but their spirits lifted when they found a motor circuit almost within walking distance of their new home.

“A group of us got together to build a dirt track racer. We all pulled together $55, but we needed $1,000, so we went to a local businessman, Jimmy Taviani,” said Mario. “What we’d brought from Italy was a desire and passion, and we made the best of the opportunities to pursue our dream. Jimmy was a racing aficianado and we projected such enthusiasm, he co-signed a guarantee for a loan.”

Jimmy also gave the boys a workshop in which to build their 1948 Hudson racer. “After school we did our homework and then we’d work on the car all night until the milkman arrived,” recalled Mario.

Dirt track racing was brutal, but Mario insists it taught him skills he would use in every other branch of racing. “Road racing runs in all conditions and in the wet, and on an oval, the best car control excels. That’s what you learn on a dirt track. You’re always sliding, almost out of control.”

Sadly, Aldo had a serious accident in the Hudson, and he never had the same racing confidence again. Mario continued to win money and drive in ever-better cars.

During the first year of their marriage, all of Dee Ann’s wages from working in a shirt factory went on maintaining the engine of his car. Mario made his mark in USAC, then ARDC midgets, Champ cars and Indy racing, but his goal was always Formula One.

In 1976, he joined the British team, Lotus, under the charismatic genius Colin Chapman, although their car was anything but a winner. Together Mario and Chapman worked to improve every aspect of it, and clinched the 1978 World Championship at Monza – the very same track were Mario had been inspired by Ascari all those years ago.

Mario’s celebrations were short-lived, however. His close friend and team mate Ronnie Petersen sustain leg injuries in the race and when Mario drove to the hospital the next day to visit him, he was told that complications had caused a stroke. Ronnie was dead.

Even 32 years later, the tears well up as Mario is reminded of the tragedy. “It shouldn’t have happened,” he said. “That should have been the highest point of my career, but it was the darkest.”

Mario would return to Monza in happier times, thanks to Enzo Ferrari. Every Italian driver wants to drive for Ferrari, but Mario is probably the only driver who said no to Enzo three times, each time because of previous commitments. “I place a lot of value on my relationship with Enzo. He was always direct with me, although he seldom spoke to some drivers. He had a real style about him, so strong and intimidating.”

Ferrari tried unsuccessfully to tempt him away from Lotus in 1977 by offering to double his salary. “I’ll never forget this – he said ‘I can’t put a price on your talent.’”

Mario finally raced for the Ferrari Formula One team in 1982, but just for two races, replacing Didier Pironi for the final events of the season. Mario had returned from Formula One the year before, but returned to Monza to snatch pole position in a Ferrari 125C2. The ecstatic Italian public gave him a hero’s welcome, and it was one of the happiest days of his life.

Even though he never moved back, Mario still treasure his memories of Italy, and his mother’s recipe for  gnocci with beef and sauce (best with Idaho potatoes).

His Napa Valley winery will soon be launching a new Italian-style Pinot Grigio, and he’s as excited about that as if he’d just won pole. It’s guaranteed that whatever Mario Andretti does, he will always be a winner.